Practicing sucks. There – I said it. I’ve never been one of those guys who practices 23 hours a day. I don’t practice the same beat over and over 10,000 times, and I don’t lock myself into a room to play rudiments for hours each night. Playing like that is completely boring, unappealing to me and, honestly, makes me want to jump out a window. I love playing – I just hate practicing!

But the truth is that unless you are a music prodigy, you do need to practice if you want to nail that cool fill-in, be ready for that upcoming show, audition, or if you want to expand your playing in general.

Where Do You Want To Be?

How you go about practicing somewhat depends on what you want out of yourself as a drummer. Do you want to be a drumming Jedi with endless solo chops, or are you content just being a simpler groove player? Are you all ‘punk rock’ and don’t care if you sound as drunk as you may look, or are you a perfectionist player? Do you want to be a master of many styles, or do you specifically just want to be a good industrial polka drummer? You just have to be honest with yourself about where you want to be.

Personally, I’m kind of in the middle: I have some chops and want to keep them. I’m interested in growing and learning more yet I don’t feel the need to constantly practice and try to be the next Steve Smith. I am generally happy with where I am with my playing. I just want to be able to consistently and comfortably play what I want I play.

Practicing Doesn’t Have To Be A Chore

Practicing doesn’t have to mean sitting there and playing boring rudiments for 17 hours straight. While practicing like that very well could help you improve at a much accelerated rate of course, you can find other ways to go about practicing that will still help you.

Here are some different ways I practice to work on some skills yet keep it fun and fresh:

Play To Your Favorite CDs (whatever those are…)

I have some wonderful headphones which not only have a line-in so I can plug in my iPod or CD player, but they have a built-in adjustable metronome! (Here’s a similar type of isolation headphones as an example. I believe Rod Morgenstein has his own isolation headphones available as well) These have been absolutely fantastic! I can hear the music and easily play along without having to crank the volume to 10,000 (or 11) and completely blow out my hearing. (Not to mention, it’s MUCH more convenient than trying to stuff your iPod/CD player headphones into soundproof ear muffs.) Playing to music with higher production quality will be better for you. Higher recording quality is more likely to be recorded to a clicktrack which will help your timing. Play to all different types of music – not ALL rock or ALL polka (?!). You’d be surprised how even a favorite album you’ve always considered “easy” can prove to be a challenge to actually play.

Play Your Favorite Songs But Play Your Own Parts Over It

This can be a lot of fun. For example, maybe I’ll play to GNR ‘Paradise City’ but put double bass under most of it. Maybe I’ll play a cheesy 80’s song but try to grind through it. Or maybe I’ll just play along to a simple song but will work on incorporating fast or complex fill-ins. Not only can some of this be good improv practice, but it also brings new life to your favorite practice songs.

Years ago, I signed up for the Guitar Center Drumoff competition. I had never done a real drum solo at any point, so I started practicing for it and found it was very difficult. I had always practiced my band songs, but not soloing.Practicing soloing really helped with me with improv playing. While playing a show years ago (after having worked on soloing for some time), I realized mid-show that I was able to think of some neat fill-ins on the fly and play them right into the song as if that’s what I always played. I’m NOT saying “Yeah – just learn to solo through EVERYTHING!” It was a Matrix moment when I realized that I could think of something on the fly and easily make it happen right then and there.

Practice Your Band’s Songs From Memory To A Metronome

I found this has had two big benefits for me. First, playing to the evil metronome showed me what parts I was speeding up or down. It helped me ‘reset’ how I played certain songs or sections. Second, playing to the songs from memory helped me to visualize the song. I’m sure you’ve heard of ‘visualizing your goals’ on late night infomercials or something. This was similar in that I was seeing the song in my head and not relying on monitors to know where I was. That is a VERY handy skill, especially if you’re playing metal where you’re usually playing at ridiculous volumes in tiny clubs with crappy-ass sound systems. If you CAN’T remember one of your band’s songs from memory, then go listen to those songs about 20 times RIGHT NOW. If you can’t remember the whole song, how can you possibly expect to remember it properly at the show with adrenaline and so many extra distractions?

Practice With A Friend

By far, the most improvement I ever saw in my playing was from playing with other people. I joined my first band the second I got my first drum set, and we immediately began playing and practicing. I went from not knowing how to play to playing little shows in high school within 2-3 months. Everyone brings their own style to the table; you almost always learn and grow musically with each person you play with. The guitarists in my old metal band had their own styles and strengths. It was a completely different experience playing with each of them individually. In fact, one guitarist and I would play random Van Halen and old Anthrax songs when we got together. He was probably the only person I’d ever played those songs with. Playing things you don’t usually play help you get outside of your own mental box and open your playing.

I have never said, “You don’t need to practice!” You certainly aren’t going to win the Olympics by sitting on the couch, eating donuts though.

You really SHOULD practice – it will make you a better player, and you’ll have more fun being able to play how you want to play. But if you’re like me and just aren’t into religious practicing routines, you can find other ways of practicing to keep up your chops and expand your drumming world while still having fun playing.

Become that Jedi with endless solo chops, prefect your groove, master many styles and be that industrial polka drummer. All you have to do is practice. 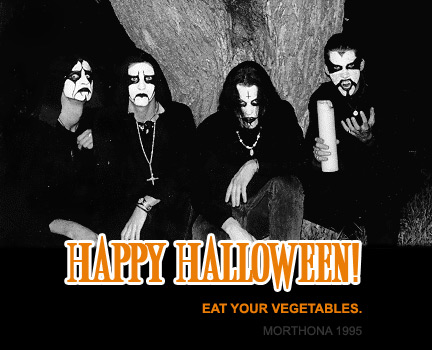 —–
This article can also be found on Musexezine.com